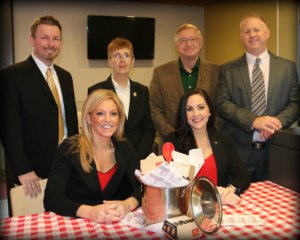 In 1981 John and Mary Moreland moved from Wisconsin to Southern Illinois and opened their first McDonald’s location in West Frankfort with their two children.   The actual journey began when John was stationed in the Air Force in Austin, Tx and attending college.  He took a job at the local McDonalds as crew.

After finishing his degree and career in the service he took the next steps to continue to grow with McDonald’s.  The couple moved to Wisconsin where John worked for an operator that had 21 locations.  He became director of marketing for the organization.

In 1980 the couple had the opportunity to become a franchisee. They chose from three locations to build their own McDonald’s and chose southern Illinois.  They are award winners, including McDonald’s Golden Arch award (only given to the top 1% in the world), the Ronald award and Operations and People awards.  Currently, the organization has more than 800 employees, around 650 crew members, and 150 managers.  They maintain their own internal training for crew and management and host top participation for the McDonalds scholarship program in their region (out of 654 restaurants.)

The organization hold nights at each location for fundraisers for local schools, and are active participants in the communities where each location resides.  McDonald’s is not only the big brand business, but a family business for the Moreland/Bishop Organization.

Stephanie, daughter of John and Mary Moreland, and her husband, Shane Bishop, became approved McDonald’s operators in January of 2009.  They currently own four of the 14 locations in the organization, Herrin, Carterville and two in Carbondale.   Stephanie grew up in West Frankfort and began working in the restaurants as a grill opener.  She began the process to become an approved operator in 2005.   She says, “I truly enjoyed the journey, looking back, would not change one step in the process.  I am thankful for the team that helped me along the way. I am especially thankful to my parents for the opportunity, their support and guidance, and to my husband Shane who partnered with me through the process.”

The Moreland’s son, Michael and his wife, Nicole, have returned to the region and have joined the McDonald’s journey.

The family is thankful to do their business as a family, and equally grateful to their McDonald’s family that share a work day with them.  The goal, both for McDonald’s and the Moreland/ Bishop Organization, is being America’s Best First Job, and offering top quality, service and cleanliness to their customers.

They will be honored at the Mayor’s HerrinFesta Honoree Banquet May 22 at the Herrin Civic Center.