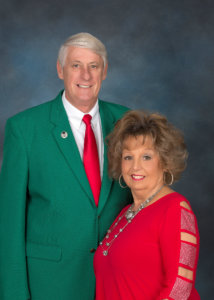 HerrinFesta Italiana names Herrin Mayor Steve and Sharon Frattini as Grand Parade Marshalls for 2018.  They will be honored throughout the Festa event May 21- 28.

He first served as an alderman on the Herrin City Council.  He now serves as Herrin Mayor.  He combines a comprehensive and diverse professional background to bring leadership skills that focus on the safety, concerns, needs and entitlements for all Herrin citizens.

Frattini is a second generation Italian, whose grandparents were natives of northern Italy, Cuggiono/Bernate.  His mother’s family was a blend of German and English heritage. The Frattini family has roots in the 200 block of North 10th in Herrin. His parents, Stephen and Rollena Frattini moved to Marion where Stephen was born.  He has one older brother, Lynn Paul Frattini who is deceased.

After graduation from Marion High school he worked at SIU Touch of Nature both in high school and college with special needs children and adults. He served in the military and graduated from SIU.  He returned to Herrin after a work career in Austin, TX.

He is active in the community including past service on the Board of Directors and treasurer for the former Egyptian Council of Boy Scouts of America, part of the coaching staff of both baseball and softball teams at Our Lady of Mt. Carmel School and the Herrin PONY Leagues.  He is currently a member of  Herrin Chamber of Commerce, Rotary Club, Knights of Columbus 4th Degree, Elks and Pigeon Inn.

He is extremely proud of his Italian heritage.  In l996 he initiated a contact in Tornaco, Italy.  With the help of Bob Ferrari, Mayor Ed Qualgia and others was able to bring a journalist and his mother from Novara, Italy to their first HerrinFesta.  He and Mayor Quaglia and their spouses later visited the Peidmonte and Lombardi regions of Italy.  This prompted a visit by approximately 100 visitors from the regions of Northern Italy to the l997 Festa.

Today, Herrin  has an official sister city, Cuggiono, and is engaged in a student cultural exchange program through continued efforts of Cavaliere Sandra Colombo and Michaelann Stanely, numerous host families and supporter of the program.

Mayor Frattini guides Herrin in a proactive manner to meet challenges and opportunities in the community.   His mantra is “facilitating a great level of citizen input and involvement in the affairs of city government and the community is the guiding focus.” His pledge is that as a city government, Herrin will continue to seek out and develop incentives and be business friendly to retain, attract and grow business.

Herrin’s First Lady, Sharon Frattini,  was born in Lexington, KY, attended the University of Kentucky and says she is a “true blue” Kentucky basketball fan.

She has traveled extensively in America, Mexico and Europe.  She is a former TWA flight attendant, and remembers flying into the Herrin/Marion Airport with TWA Express years ago.  She worked as a travel agent, realtor and currently continues her longstanding career as a decorating and design consultant both in the commercial and residential arenas and works for a local furniture store.

Sharon found her “ heart home” became Herrin when she married Steve in 2005.  She looks for, and has found, ways to celebrate Herrin. She introducedthe Annual December Herrin City Hall Holiday Open House in 2015.  Each December hundreds of children and their families come to this happy event.

She has worked to great success with fundraisers for people in need and was instrumental in organizing The Herrin Farmer’s Market and serves as committee treasurer. She serves on the Downtown Revitalization Committee and helps Ed Avripas decorate Herrin City Hall each year. She has served as a regional beauty pageant judge.

Both enjoy summertime living, pool time, working in their flower garden, and Sharon in the kitchen learning new Italian dishes for her husband. Steve is a fisherman and plays in annual golf outings.  They are both Kentucky Colonels but he remains a Saluki loyalist.  They share a blended family, Stephen Frattini III and Stephani Frattini-Bowlin, Jason Losch and Shari Cable and 9 grandchildren.

A power couple who share their goals to enhance the Herrin community have brought life and laughter to city government and to their many friends and family.  Cris Trapani, HerrinFesta President, says “We are pleased to honor Mayor Steve and Sharon Frattini, they make Herrin shine, and work tirelessly to ensure a bright future for our city.” They will be honored at the HerrinFesta Honoree Banquet May 22 at the Herrin Civic Center.