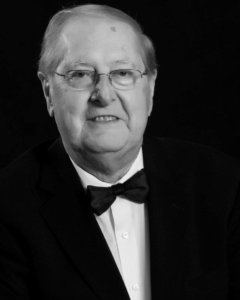 HerrinFesta Italiana Lifetime Achievement award recipient for 2018 is  Renald (Ren) Morani, Naples, Florida.  He is a Herrin native and a 1957 graduate of Southern Illinois University. At SIU, he was a member of Tau Kappa Epsilon fraternity serving several years as treasurer.
His parents were Martino and Angela Morani, who arrived in Herrin in 1925 from Inveruno, Italy, now deceased, and one sister Mary Fox of Herrin. He attended our Lady of Mt. Carmel Grade School.  He was active at Herrin Township High School elected as an officer of his Freshman class and graduated in 1952. During high school, he worked for the local Daily Journal newspaper in the circulation department.
At SIU he majored in Business Management and Accounting and was a member of Tau Kappa Epsilon social fraternity.    He worked part time for the Southern Illinoisan newspaper in the circulation departments at both Carbondale and Murphysboro.
After graduation with a Bachelor of Sciene degree in business Adminsitraton (accounting),  he joined the U.S. Army Audit Agency in St. Louis, Mo.   In 1960 he was selected  as the Outstanding Auditor of the Year for the Agency.  In 1967 he transferred to the Washington D.C. area with the Pentagon’s Defense Audit Agency. He later transferred to the Department of Transportation in helping to establish the initial Office of the Inspector General.

He retired from government in December, 1993 and moved full time to Naples, Florida in 1994.  He  became active with the local Naples Italian American Club,  and served several years as president and treasurer.  He was instrumental in  converting the original Italian Club into a 501C3 charitable foundation organized exclusively for charitable and educational purposes and expanding its mission of promoting and preserving Italian heritage and culture in Collier County, Florida. He remains a member of the SIU Alumni Association.
Morani and his wife, Josephine (Lutostanski) were married Dec. 29, 1956 at OLMC. They  have two sons, David of Ft. Defiance, Va., and Richard of Fairfax, Va. and two grandchildren.  Josephine’s sister and brother in law were Mario and Clara Comerio of the Comerio Bakery family in Herrin.
He will be honored at The HerrinFesta Honoree Banquet May 22 at the Herrin Civic Center.